No-one is recognised as knowing more about Hollywood and celebrities than David Hartnell MNZM. He’s not only spent a lifetime reporting on Hollywood’s trivia, gossip and scandals, but he counts many celebrities among his personal friends. Every Monday morning David will give you an exclusive weekly update on the gossip, scandals and trivia of Hollywood’s elite.

David is an award winning broadcaster and columnist he’s also the patron of The Variety Artists Club of New Zealand Inc. Her Majesty The Queen, awarded David the Insignia of a Member of the New Zealand Order of Merit (formerly an MBE) in the Queen’s birthday Honours list 2011. In 2012 he was made an Ambassador St James Saviours, the trust formed to save the iconic Auckland theatre. In 2014 he was made an Ambassador to the Prostate Cancer Foundation of New Zealand.

Known by some as the ‘Godfather of gossip’, David Hartnell MNZM has amassed a fabulous resource of detail about Hollywood and television movies and stars throughout his long career interviewing celebrities and reporting on trivia, gossip and scandals. His knowledge ranges easily from the 1950s to the present day. 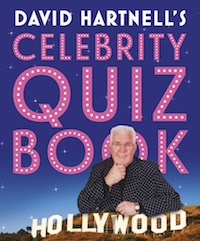 Now David has written this quiz book as a celebration of the rich variety that the movies and television have brought us over many decades, and the personalities who’ve been working in both industries. Presented in an entertaining but informative fashion, the more than 1,700 questions and answers are arranged in rounds of three, with answers close by. There are also specialty feature quizzes with questions related to a single subject, such as Oscar-winning films, Lord of the Rings, Sequels and Remakes, even TV pets.  Collected trivia about celebrities and stars also feature as interesting snippets through the book. People love to be an authority on celebrities – the celebrity pages are the most popular pages of any magazine.
Whether it is used for pub quiz nights, parties or even long car trips, David Hartnell’s Celebrity Quiz Book will highlight to a wide audience the important milestones in the development of this most popular of cultures, and test how well you really know the world of entertainment.
This book will appeal to everyone who watches television or film.This is his ninth book.
Available in all good books store’s and on line, published by New Holland $19.99.;

‘Written in the stars – David’s triple celebrations‘ in the NZ Woman’s Weekly.  View the article here on David’s website.