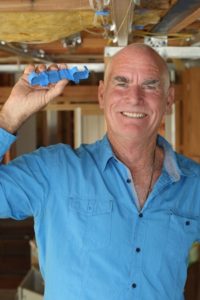 Many hands may make light work but, when it comes to wiring a house, plenty of solo electricians have found themselves between a roof and a dangerous place. Fortunately, there could be light at the end of this particular tunnel thanks to an innovative Aucklander.

Tony Bull is on a mission; a mission to ensure the world’s electricians are Well-Hung. This bright sparky (from Bull Electrical) has taken a new invention, the Well-Hung Bracket, to market.

“The old school way of running cables involved pin clipping every hammer length, but as more and more ceiling battens are made of tin, that’s not possible,” he says. “Instead, contractors are using other improvised solutions to secure wires, such as insulation tape, but they’re far from ideal.”

He explains that, if a worker later hits a live wire with a screw – which can happen when fitting ceilings, for example – they could receive “quite a jolt”

“The Well-Hung bracket avoids this risk by ensuring wires are secured away from metal battens. It makes it a lot safer for all tradies to work.”

The brackets offer a quicker and tidier solution too; Tony estimates that ‘Well-Hung’ electricians could save approximately two hours when wiring the average home.

Of course, every invention requires a light bulb moment and Tony’s came (unsurprisingly) while he was on the job.

“I was fitting metal battens to a ceiling while wiring a new home. I used to get a bit of timber to span any two battens and tape my wires on to keep them clear. I thought ‘there has to be an easier way.’ Later, at a wedding, I began scribbling, getting some sketches together.” 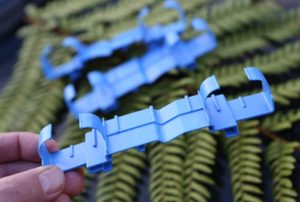 However, it wasn’t until Tony was sure he was on to a winning idea that his wife, Christine, became aware of just what her husband was up to.

“I used to call it my secret!” he says. “Chris used to tell me off because I was spending so much time working on it but she was quite excited and very supportive when I eventually told her what ‘it’ actually was.”

With help from some other resourceful sorts,  a prototype for the Well-Hung Bracket was born. His brackets are now available through  electrical wholesalers.

Tony has also received interest from other trades, here and abroad, and favourable comments from many who are highly satisfied with being… well, Well-Hung.

“We’ve had great feedback so far; huge!” Tony confirms. “Guys who have used it say they love it and no one’s knocked it yet!”

Like any good inventor, Tony is already working on another project, which will expand the range even further.

But what’s with the name? Surely this invention by any other name would sell as sweetly.

“Yeah it is quite hard case, I know. I just thought it says what it does, ensures cables are well hung. It’s totally innocent, no double meaning intended, I swear!”

Somehow I think this response from Bull is just that!

However the name and brackets’ colour do hint at a more altruistic purpose, with five cents from the sale of each destined to assist the Prostate Cancer Foundation.

“It doesn’t sound like much but they way they spit out the mould, there’s two produced every eight seconds,” Tony says. “That should add up to big dollars in no time.”

Story by Jon Rawlinson on btob.co.nz