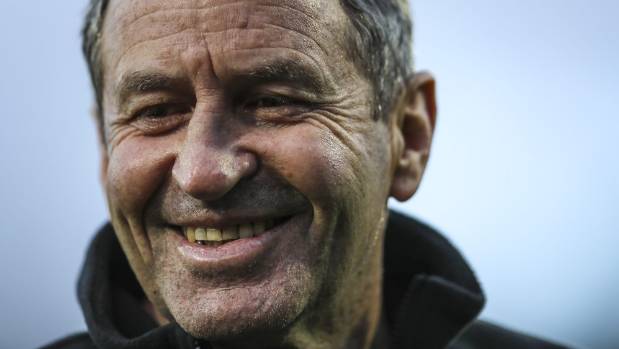 Wayne Smith wasn’t at the New Zealand Rugby Awards last month to accept the Steinlager Salver for exceptional service to the game.

Just three days before, on December 11, his prostate was removed after cancer tumours had been discovered.

The 60-year-old, who left the All Blacks last year after a glittering career as a player and coach over a 37-year arc, was thrilled and humbled by the service award.

Last Wednesday there was more exciting news. His surgeon Michael Holmes rang from Hamilton to say the pathology report on the prostate had been completed, and it indicated that, most probably, Smith had been cured. There was no sign of any cells being left behind.

Smith was happy to speak about his experience with prostate cancer in the hope it “might encourage guys in their 50s to go and get the tests, and get a marker. It doesn’t mean you’ve got it, but if it is there, you can fix it”.

A non-smoking, fit, healthy eater, Smith’s kept himself never more than eight or nine kilos above his playing weight in the 1980s. Since he turned 50 he’s been having an annual medical check-up, covering everything from cardio tests to cholesterol levels.

“My doctor in Cambridge (where Smith and his wife Trish live), John Russell, decided to start doing some PSA tests, when I was getting blood tests.”

PSA stands for Prostate Specific Antigen, a protein produced by the prostate. Changing levels can be a sign there are cancer cells in the prostate.

“I was getting the blood tests about every six months. It was high PSA levels that initially alerted the doctor. High levels don’t automatically mean you’ve got cancer, but it is an alert, and it led to me getting a digital exam, and he then thought, ‘Hmm..there’s a hard spot there.’ Could be nothing, but he sent me to the urologist.

“Then I had an MRI test (magnetic imaging scans), which showed up some tumours.”

Smith shared the news of the tumours revealed by the MRI scan with his wife Trish. At first she thought he was joking. “I came home and Trish said, ‘How did it go?’ I said, ‘Aw … I’ve got prostate cancer.’ She laughed, because I’m always having her on.

“We had a wee chat. I said, ‘Look, it’s curable, so let’s take our time, get a few tests.'” He laughs. “I had a bit of footy to coach, so I was trying to juggle both things, and tried not to think about it too much really.

“Through the Rugby Championship I knew I had it, but I didn’t really talk to anyone (inside the All Blacks). The only one was the team doctor, Tony Page, and I didn’t even tell him.

“I just said I was struggling to sleep, and he gave me some great advice: ‘Just think about the past, not the future, then your mind won’t be too active.’

“That was great, because sometimes I had been lying there at night thinking, ‘What the hell am I doing here?’ But after talking to Tony I was able to handle it pretty well. The urologist wasn’t too worried because it was pretty slow moving. That was the line I took.

“Still at times you have a wee moment where you think ‘Gee, I hope this is going to be alright.'”

When the time came to make a decision on treatment, wife Trish joined Smith in researching the subject.

“Trish was great. She was reading a lot about it, and would suggest things I should look at. Eventually my mind set was: ‘Just get the thing out.’ The urologist didn’t really make recommendations, but he gave me a lot of options.”

Before the operation came a CT scan (basically a computer programmed examination of a series of X-rays) to see if the cancer had spread elsewhere.

“The results took a week to come through, and I was starting to picture, ‘Jeez, are there that many on the screen that they’re still counting them? Have I got it everywhere?’

“Then the text came through: ‘You’re all clear, apart from the prostate.’ It was as simple as that. The relief was enormous.”

“We made the decision for the prostatectomy (full removal of the prostate), and chose Michael Holmes, and the anaesthetist, Rob Carpenter, knowing that the treatment would be world class.

“I was so impressed. They were brilliant. The whole operation and the recovery was easier than some of the rugby injuries I’ve had.

“I was out of the hospital after a day and a half, at home walking around and recovering really early. I wasn’t on opioids, no morphine, or anything, because they were so great at managing the pain immediately after the operation.”

The discovery he had cancer played no role in Smith’s decision to step down from the All Black coaching team.

“Leaving (the All Blacks) was decided at end of 2016. But what’s happened (having prostate cancer) did clarify for me that I’d made the right decision. It sort of made me think, someone’s looking after you.

“Now I’ve got to spend time making sure I get myself right. I have a couple of little projects I started arranging immediately.”

Despite leaving the All Blacks after so many years of faithful service, Smith won’t be stepping away from rugby completely.

“I’m going to help the Kobe Steelers club in Japan. They have a relationship with the Chiefs, and I’m going to have an involvement with the coaches at Kobe and get a bit of coaching in from time to time.

“I’ll also be doing two to three weeks with the Italian national team coaches over the year. I’ll attend a couple of camps to have a mentoring-type role with Conor O’Shea and Mike Catt. I have a real passion for Italy, its people and their rugby, so Trish and I are looking forward to getting back there now and again.”